Gareth Morgan’s Opportunities Party is working to appear a radical departure from the status quo. Proposals for a dramatic change to taxation policy and the partial roll out of a Universal Basic Income are a welcome political development. It’s good to have a political party seriously calling for the rich to pay more tax. But despite this, the policy package of The Opportunities Party (TOP) would hurt working people. Behind attention grabbing rhetoric TOP maintains a deep commitment to establishment economics and neo-liberalism.

They have some strong and positive ideas. TOP makes proposals for stronger renters rights. NZ has some of the worst tenancy rights for renters, and better protections for renters is very overdue. They also support the Greens plan for a warrant of fitness on rental homes to ensure a basic and safe standard of housing in NZ.

All good right? Nope! There are really worrying parts of TOP’s plan, specifically-  “We will expand provision of social housing by gifting Housing NZ houses to the voluntary sector.”

This is privatization- but worse.

Firstly- this makes no sense from the perspective of “expand(ing) provision”. There is zero expansion of housing provision when you take a state house, and gift it to a “social housing”. Houses don’t magically multiply through a change of ownership. Whoever owns the stock of state and social homes in New Zealand, there is still a chronic shortage of secure, low income housing.

Secondly- this is actually worse than the privatization. Past Labour and National governments sold public assets, TOP wants to give them away! Even the most corrupt privatization deals have meant that the state received at least some payment, which is then invested in other public services. TOP is certainly bold- they suggest a wholesale transfer wealth to an unaccountable and undefined “voluntary sector”.

For all the problems with state run services, they are universal (available to everyone) and are (nominally) democratically accountable. When you transfer these assets to a non governmental agency that’s no longer the case. People have a right to expect that public services are offered through secular providers. We shouldn’t expect queer youth, who are significantly over represented among the homeless, to have to go to the Salvation Army who have a history of homophobic discrimination to ask for housing.

Even if policy was put in place to prevent discrimination, the suggested policy would turn over all social housing provision into a market place, with different “social” providers bidding against each other for government money to provide a “service”. This doesn’t lead to better service outcomes, but does put economic pressure on providers to cut costs to avoid being undercut by others.

Turning housing into a market has hurt working people and led to the current crisis. TOP’s solution to double down on market orthodoxy force what little non-commercial housing left into the market.

The more you look at TOP’s policies, its vision for the world gets less and less friendly for the poor and dispossessed.

This is perhaps most clear when it comes to a living wage.

He accused Labour of living in the past. Labour has proposed that the government should introduce “Fair Pay Agreements” that said industry standards to avoid unionised workplaces being undercut by hostile employers.  “interfere in how businesses are run, potentially fatally”. This seems strange given that such an award system exists in Australia- and Australian businesses don’t seem to be being driven into the sea…

He writes; “hiking the minimum wage is very risky. While we all want higher wages, particularly for those at the bottom end, regulation isn’t the best way to achieve it. The risk is that businesses become even less willing to hire young people, so we end up with higher unemployment as we see in Europe. Remember New Zealand’s minimum wage is already very high…”

TOP repeatedly claims that it is a “evidence” based party but this is outright bullshit. 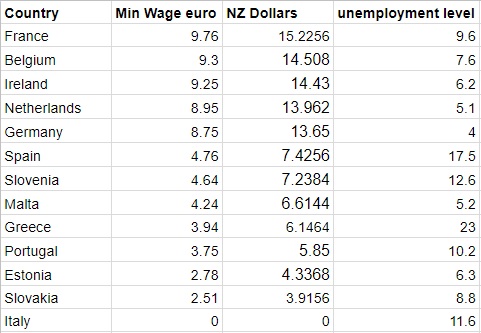 Unemployment is a complex problem and simply saying that higher wages mean less employment is at best misleading, and at worst just plain wrong.

And sure, It is true that the New Zealand Minimum wage is “high” by some international standards. It is objectively true that the minimum wage of $15.75 NZ is higher than the $1-a-day wages paid to sweatshop workers in Bangladesh. This isn’t actually very relevant. It can be relevant for an industry like textile manufacturing, but is increasingly less relevant for the NZ economy. A Queenstown Hotel or a Taranaki dairy farm cannot be moved to the Philippines to undercut wages here.

TOP arguing against raising the minimum wage is peddling a lie- lie that’s been used to keep wages low. The reality is that the NZ economy has never been more productive or profitable for business. Working people are getting a diminishing part of the pie- and that’s wrong. Many of the tens of thousands who live are in paid work. Any realistic plan to tackle poverty has to include raising wages.

We do need a new political movement in Aotearoa/New Zealand. Unfortunately it’s not going to be driven by disgruntled millionaire economists. Where TOP does have good ideas the left should be shameless in stealing them. But as a vehicle for progressive change you can only go so far if you are unwilling to make a deeper challenge to the economic status quo.