After 8 years of Prime Minister John Key has stepped down. Bill English will be the new PM but an election is due next year. The sudden departure of Key leaves a political space that must be filled. All politicians will be trying to make the most of this unexpected opportunity, and chief among them will be NZ longest serving MP- Winston Peters.

There are many myths surrounding Peters. For some people, these myths can make his party (NZ First) appear like a project for a new, more progressive politics in New Zealand. The truth is very different. NZ First isn’t committed to protecting New Zealand from powerful foreign interests. And it’s certainly got no meaningful claim to supporting governments of the left. NZ First is a contradictory collection of individuals around the personal ambition of Winston Peters.

So, Winston might be an entertaining politician, but he is no friend of working people. 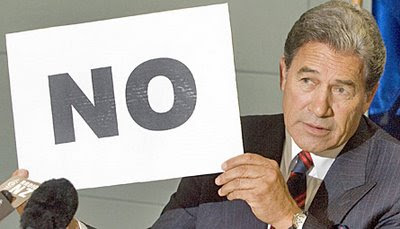 The Peters Myth vs Reality

The Winston Peters myth is constantly evolving, but he often likes to paint himself as a political outsider. Winnie likes to portray himself as straight talking, and standing up to the establishment. To give him credit, the fact he can sometimes pull this off is a master class in political spin. The reality is, Winston Peters has more claim to being the political establishment as any other New Zealand MP. He is the country’s longest serving MP, and has been a minister three times, including being Treasurer between 1996-1998 and Foreign Minister between 2005-2008.

While Winston wants to appear to be the chief critic of economic neoliberalism and NZ being a pawn in American imperialism, while serving as a minister he failed to make any dramatic departures from political mainstream. He has had his opportunity to raise an alternative, but has failed to do so.

It is important to judge politicians based on their actions, not just their words. The more you look at Winston’s record, the larger the gap between perception and reality.

For some activists, NZ First’s stance against the TPPA has given them some credibility. NZ First has publicly stated concerns about the effect the TPPA would have on working conditions in NZ. While it is true that NZ First has generally been economically nationalist, concern for working people is a new phenomenon. It needs to be remembered that Winston Peterssupported the employment contracts act in the 1990’s. This directly led to an assault on the wages and conditions of working people and the Union movement. Today, NZ First maintains a policy to create provisions for permanent ‘casual’ employment, which would bring back and re-legalise Zero Hour contracts.

To build a mass following, NZ First has tried to channel something darker- xenophobia. Winston Peters consistently appeals to racial divisions to further his own career. Peters has been one of the most vocal critics of ‘Maori privilege’, and consistently blames the Auckland housing crisis and unemployment on migration.

It’s nonsense.Rather than being privileged- Maori are over represented in prison and unemployment numbers.  Housing prices increases and unemployment stem from changes in government policy going back to  the 80’s,  trends extend over decades, and cannot reduced to immigration. For Peters though, the facts don’t matter. It doesn’t need to make sense, it just needs to pander the the superficial fears of some voters. He has perfected this politics of fear.

Understanding this phenomenon is important for leftists for two reasons:

Firstly, false debate takes attention away from the real radical alternatives we need. To fix housing we need to take on big money investors. Most of which are Kiwis, not foreign investors.

Secondly, if the political conversation focuses on distractions, the solutions that working people need will not be discussed and fought for. It makes it harder to build a movement for change. This needs to be a movement that can provide solutions that work for the majority, not those with money. Working people are divided, it makes it harder to put the blame back on the root cause- a political and economic system that puts profit ahead of people.

Aotearoa/New Zealand needs a new political project. There needs to be an alternative to the growing poverty and environmental destruction today- the world depends on it.

When building this bold vision for the future, do we want a former National MP with an axe to grind to be front and center? Do we need someone whose politics is self promotion, or do we need a new politics that promote ourselves?

Do we really want to trust a politician who tries to tell you that your problems are caused by your Maori and migrant neighbors, all the while he’s wining and dining with the racing industry and the rich?

Do we really believe a politician who’s been in parliament for 4 decades, been a minister three times, and took jobs with both Labour and National, when he tells us he stands for ordinary kiwis?

Is this the best that we can do? Some people, be they desperate or deluded, believe that it is. I beg to differ.

I believe that a movement of people in Aotearoa/New Zealand isn’t just possible, it’s necessary.  I believe that it’s not important where you’ve come from, but what change you want to see. When ordinary people come together, another world is possible.

But that will only be possible if we don’t settle for bullshit and bullshit artists.

4 thoughts on “The reality of Winston Peters.”